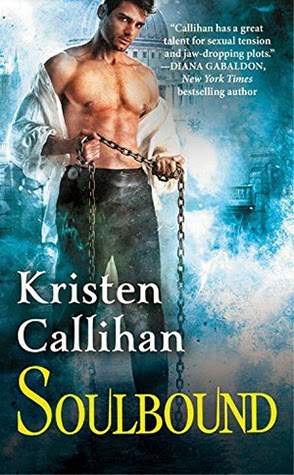 Heat Rating: Steamy
Source:  I got a copy of this book from the publisher  in exchange of an honest review.
Amazon | Goodreads

Once two souls are joined...

When Adam's soul mate rejected him, there was more at stake than his heart. After seven hundred years of searching, his true match would have ended the curse that keeps his spirit in chains. But beautiful, stubborn Eliza May fled—and now Adam is doomed to an eternity of anguish, his only hope for salvation gone...

Their hearts will beat together forever...

No matter how devilishly irresistible Adam was, Eliza couldn't stand the thought of relinquishing her freedom forever. So she escaped. But she soon discovers she is being hunted—by someone far more dangerous. The only man who can help is the one man she vowed never to see again. Now Adam's kindness is an unexpected refuge, and Eliza finds that some vows are made to be broken..

My first go at the Darkest London series and I have enjoyed it so much that I cannot believe I have missed out on the earlier books.

Adam has been cursed and the only one who can ended is his soul mate. After spending hundreds of years searching and waiting, he finally finds her, only to have her reject him. Eliza May has managed to flee Adam the king of GIM's, with the help of a few unlikely characters. After being chain and treated ungracefully by the King of GIM's it's no wonder she grew to hate the man, until she finds him chained and broken in Mab's house. Unable to watch him in such a horrible soul crushing situation, Eliza decides to try to rescue Adam. Now they are on the run, not only are they being chased by the dangerously obsessed Mab, but also a very dangerous man who wants her all to himself. With Adam's powers dampened by the chains, the two of them would need to find help from people who may or may not still be loyal to Adam.

Great story. I love how it takes Historical Fiction and Paranormal Romance and turns out a very interesting read. I liked the time period and the two elements work well together, which also happen to be two of my favorite things.

Adam was, well... He grew on me let's just put it at that. The way he treated Eliza at first was infuriating, which made me understand why Eliza ran. It also paved a great road for conflict and why Eliza did not accept him as her soul mate at first. At the same time his actions were also a bit understandable. Because of his curse, people are attracted to him, but Adam does not feel any sort of emotion towards them so he has lived a very lonely life for a hundred of years. In a way, he doesn't really know how to act towards a woman he is suddenly in love with.

Eliza was a fierce female lead, I liked her well enough. I enjoyed the slow building relationship between the two and glad that the author did not rush it and make it feel like insta-love, especially because these two are supposed to be soul mates.

Filled with action, excitement, paranormal and secrets, Soulbound was a very entertaining read. I enjoyed the story line, I liked learning about Eliza's secret and the extra story with Sin that branched out and paved the way for the next book. Soulbound had some very original and creative elements that remind me again and again why I love Paranormal Romance.