I think I have a small announcement to make. After much thought. I have decided to move my site from blogger. What I am still sitting on is thinking about changing my name while I am at it. I do love Lily Pond Reads, it will always be a part of me. After all, I created it. So the move is a bit scary but I feel like I need it. I owned a blog for 3 wonderful years and I have enjoyed it. But, a lot has happened since I created this blog. For one, I did not think it would get where it is today. It's not huge, it's not big, but it's actually noticed and that makes me proud. For second, the last two years, a lot had happened and I feel ready for a small change. I lost a couple of family members, I had my son. My life changed and now I guess I feel like my blog should take a different stop with it. I might be closing doors on Lily Pond Reads - but I am not closing doors on blogging, just re-inventing myself? The only thing that is delaying my move is the name change, totally on the fence. When I made it , it was kind of a spur in the moment thing..you know? Anywho! onto the review. 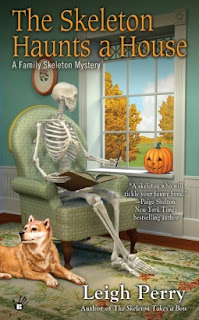 Paperback, 304 pages
Series: A Family Skeleton Mystery
Genre:  Cozy-Mystery
Heat Rating: Kissing
Source:  I got a copy of this book from the publisher  in exchange of an honest review.
Amazon | Goodreads

What holiday could bring more warmth to a skeleton’s chest cavity than Halloween? And when you’re a living skeleton who’s not supposed to be seen outside the house, it’s a welcome chance to get some fresh air and rub bony elbows with people. That’s why Sid doesn’t mind wearing a full-body dog suit and going as Scooby-Doo along with Georgia Thackery’s Velma to the Halloween Howl.

Sid can’t wait to go through the Haunted House—but he gets rattled for real when a genuine dead body is discovered. Trapped inside as the police quickly seal off the crime scene, Sid makes no bones about dropping the dog suit and posing as an actual skeleton. This murder is a skull-scratcher, but as long as Sid is on the inside, he might as well case the joint to figure out who used the cover of darkness to commit the perfect crime…

Well this was a fun read for this time of year! I was kind of glad I picked up this book, especially since Leigh Perry is a new author to me, but lately almost every author that I have picked up has been new to me. Still, I wanted something for the upcoming Halloween and I definitely got that with this book.

With Halloween only days away, Sid cannot wait to go through a staged Haunted House. He dresses up as Scooby-Doo and Georgia Thackery as Velma. Of course he has to wear a full-body dog suit because Sid is well...a walking and talking skeleton.

Unfortunately the night turns even more scary when a genuine dead body is discovered at the haunted houses. When Deborah, Georgia's sister ends up feeling responsible that the death has happened during her watch, she asks Georgia and Sid to snoop into the murder. Especially since the police might be looking in all the wrong places.

Okay, this was actually a totally fun read. Sid was animating and kind of amusing. Love all the bone jokes, they kind of grow on you. Sid and Georgia are an amazing duo. They complement each other very well and part of the reason why I love original and creative cozy-mysteries such as this one. I mean really, who wouldn't want a real life talking skeleton as your friend? Okay, admit a little creepy but for this series I found it fresh, exciting and definitely something new.

Pretty's writing and story telling was well developed and actually really good. I kind of liked the fact that I was able to figure out who the killer was half way into the book and be right about it, even if the killer killed for a different reason then I originally thought. I was never able to do that, but I had enough clues to lead me in the right direction, which was exciting.

I love that there is now a love interest and Brownie is great! The connection between him and Georgia is there and it's exciting. I always love a bit of love thrown into my cozy mysteries, it really adds more dimension to the story, makes the character's related-able and add a dynamic that would not be there otherwise. I am excited to see what Leigh Perry will have in store for us next.