Review: The Trouble with Christmas (Indigo Island #3) by Kaira Rouda 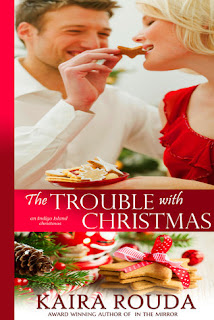 The Trouble with Christmas (Indigo Island #3) by Kaira Rouda

Heat Rating: Steamy
Source:  I got a copy of this book from the publisher  in exchange of an honest review.
Amazon | Goodreads

Recommanded for age 18 and older due to adult content and language.


At 35-years-old, Cole Stanton is burned out. His high-paced, uber-successful career has left him yearning to start over. He finds Indigo Island, buys a restaurant and settles into an uncomplicated life. But Christmas is a mess. He has over-committed the small restaurant’s resources again, and is over his head. He finds himself longing for everything he has left behind, until a chance encounter with gorgeous Lily offers a spark of salvation to his business and, perhaps his life.

Beautiful pastry chef Lily Edmonds is thirty years old and heartbroken. It’s just before Christmas and she’s just been dumped by via telephone by her fiancee. Her best friend Avery Putnam invites her to Indigo Island, hoping to add joy back into Lily’s life. A chance encounter with the sexy owner of a local restaurant makes Lily feel an attraction she thought she’d never feel again, and offers her a business challenge to keep her mind focused on something other than her broken heart.

Cole Stanton and Lily Edmonds are both starting over. Will the joy of the holiday season bring them together or will the troubles with Christmas push them apart?

Soo... not sure what I just read or how to event start this review. In a sense I am a little ticked with this book.

Yup this is also my 3rd Christmas read this September. Someone seems to be in a holiday mood huh? Kind to think of it, the book before this one centered around Halloween. Humm... anyway getting off track. Hope this review doesn't sound too harsh.

Okay, I really went with an open mind when I picked The Trouble with Christmas as my next read. I really had been in a holiday mood, plus my netgalley account was getting kind of cluttered due to missing a bunch after having my son and let's face it this looked like a quick read. Who doesn't like quick reads? Especially if you have an infant almost constantly in your other arm, like right now... heh Typing one handed /flex

Anyway. I am stalling. Like I said, I am not sure where to begin. I really wanted to like this book, but it kind of went down hill fast for me. Long story short, or short story, shorter... Lily has just been dumped by her fiance. He apparently broke off their engagement for an “arranged” marriage and he was also marrying.. up for money. Okay, whatever. So Lily is heart broken when her best friend since childhood swoops in and takes her away on a family trip to Indigo Island.

Now I will warn you. Some things upset me as the story went on so there might be SPOILERS. If you do not want to see them, you can just stop reading now... I will just tell you ahead of time, I gave this book two stars instead of one because the romance had SOME redeeming qualities. Okay? Now, if you don't want to know why I was so upset, and don't want to read spoilers, you can stop beyond this point.

I did think there was some parts of the book that was nice. Like them helping a local diner with the Christmas meals, thought Cole's tension with the owner was odd... And some parts of the romance was sweet, but a lot of it was too fast and too odd. Unfortunately, I found too much negatives in the book to fully enjoy it. But that's just me. I know a lot will still enjoy it, and that's fine, but that was just my two cents. I am sure it is still a comfy quick Christmas read for many, but for me, too many things had put me off.