Review: The Trouble with Christmas (Christmas, Colorado #1) by Debbie Mason 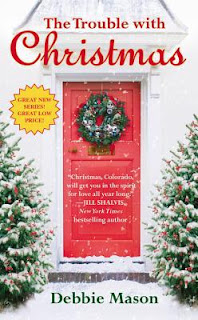 The Trouble with Christmas (Christmas, Colorado #1) by Debbie Mason


It will take a Christmas miracle to melt her heart.

Resort developer Madison Lane is about to lose the one thing she loves most in the world—her job. Dubbed "The Grinch Who Killed Christmas," Madison spoiled a deal that would turn quaint Christmas, Colorado, into a tourist's winter wonderland. Now the citizens want her fired but the company gives her one last chance, sending Madison to the small town to restore the holiday cheer.

For Sheriff Gage McBride, no hotshot executive from New York City is going to destroy the dreams of the people he loves. But one look at this beautiful woman and it's his heart that may be broken. In just a few days, Madison causes more trouble than he's had to deal with all year. He can't decide if she's naughty or nice, but one thing is for certain—Christmas will never be the same again...

Gah I cannot believe it took me so long to pick up a Debbie Mason book, I have been missing out on so much. Well I know this now, she is one of my new favorite authors. The Trouble with Christmas was a stellar start to the Christmas, Colorado series. My only hope is that the rest of them are just as amazing, but it looks like I will have to read to find out huh? ;)

Madison Lane works for a resort developing company. When her co-worker goes behind her back and tries to sign a deal with Christmas, Colorado to turn the small town into a tourist's winter wonderland, Madison's action to stop it has dubbed her "The Grinch Who Killed Christmas." Now she is forced to travel to Colorado in hopes of clearing up the misunderstanding and do some publicity damage control, but what she didn't expect that the citizens of Christmas, especially one very meddling old woman Nell McBride, has her own bag of tricks up her sleeve. When Madison is forced to stay in Christmas, Colorado to get to known the town and it's people - she doesn't expect to open up her heart to a very charming and sexy single father sheriff Gage McBride.

Seriously thought, Nell was just an amazing character. So fun, but so true to herself. I love the little matchmaking she had going on!

Wonderful story, it was such a fun and amazing read. I loved Christmas, Colorado and getting to know it's residents who I am sure now I will start to get more attached to as I plow my way into the second book. Madison was a fun character, very down to earth and honest. Due to the bad past, she has a hard time with Christmas and hates it, but thanks to a few very lovable people from Christmas, she slowly welcomes the holiday back into her heart.

Mason's writing and storytelling really shines with The Trouble with Christmas, I was so drawn in I had the hardest time putting this one down. The romance, the banter, the laugh out loud moments, and the friendship building was so sweet it was hard not to fall in love with all of it. The only reason I did not give this book a 5 star rating was due to Gage's treatment of Madison when his ex-wife showed up in town. I failed to understand it. I guess it was because of his daughters, but she just did not deserve it. I wanted to scream at him to grow a backbone. Other then that I found the romance very sweet and I love how it unfolded. It took time, it didn't feel rushed and everything just came together perfectly in a heart melting moments.

It sounds like the town of Christmas is going to stick with me for a long time.

NOTE: The Trouble with Christmas is currently on sale for only $0.99 on Amazon if you have a kindle.